Episode 11: Getting Creative When One Career Does Not Capture All Your Interests and Skills: Sophia Johnson

Episode 11: Getting Creative When One Career Does Not Capture All Your Interests and Skills: Sophia Johnson 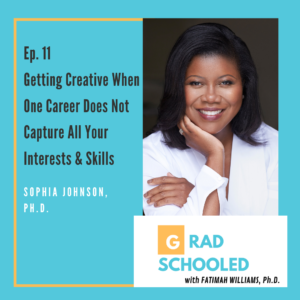 Ep 11: Getting Creative When One Career Does Not Capture All Your Interests and Skills: Sophia Johnson

After finishing graduate school, Econ PhD Sophia felt lost. She had no clue what direction she wanted to take her professional life. In this episode, we discuss how career coaching and self-exploration helped her to recognize her successes and believe in what she had accomplished. Sophia shares how she started to understand the patterns in her life, and how she came to view her worth as independent of her degree.

Sophia is an advocate of saying yes to different types of experiences instead of sitting on the sideline waiting for the perfect professional opportunity. This mindset landed her her own cable TV show where she expresses the many facets of her creativity, intellectual interests and skills outside of her 9-5.

Dr. Sophia N. Johnson is a political economist and the Assistant Director of the Program for Economic Research at Columbia University. She is also the host of The Feminist Perspective, a NY-based public affairs television series featuring wide-ranging, in-depth conversations with cultural influencers. 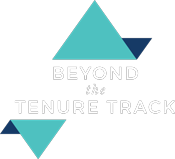 Nothing about the Ph.D. process prepares you to find a career outside of the academy, which means you probably have no idea how to navigate the mainstream job market. Making the transition to a meaningful job that pays well may feel like a scary process, but you have help.

Be Bold is a daily action guide to keep you motivated and on track during your job search. Boost your confidence and align your job search strategies with your goals when you buy Be Bold today.

Be Bold takes the guesswork out of your job search. You’ll get 30 daily statements and 30 bite-sized action steps to keep you on track.

Get Your Vision. Get Organized. Get the Job.

Are you exploring your nonacademic career options or actively searching for a nonacademic job? This 50-page weekly organizer will help you organize all the moving parts of your job search and career exploration.

Identify and track career paths you've considered, job ads of interest, companies, networking contacts, and applications submitted in one easy-to-reach place. The Career Clarity assessments guide you in narrowing down the broad range of jobs you could do, to the one or two that you will pursue.

Perfect for graduate students, postdocs and faculty who are exploring or transitioning to nonacademic careers.